For those of you who think that Google's purchase of Motorola Mobile is not a big deal .. then you should check out the front of the NY Times app on my iPad last night.  I snapped this shot. 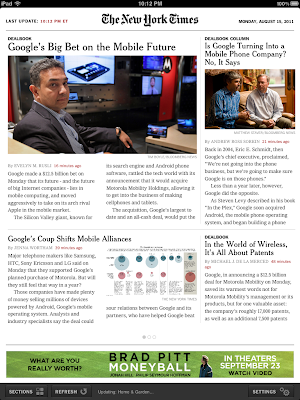 There are four stories, and every one of them deals with Google and the news.

Personally I think in the end, its a power move to get the patents after recently losing out to Apple and Microsoft i a bid for over 6000 patents held by Nortel.

Now Google has the ability to tailor the hardware for its operating system, in much the same way that Apple does for the iPhone. One of the reasons the iPhone, and for that matter most of Apple's products work so well is their tight control over hardware specs.  Microsoft got into trouble because they designed software for such a wide array of hardware platforms, it was bound to not work as well.  Google now has the opportunity to do what Apple has been doing, develop a piece of hardware that is fit to a tee for the Android OS.

Should be interesting to see the results.
Posted by Unknown at 5:22 PM

Click here to visit Love Your Photos by Jen Consalvo.